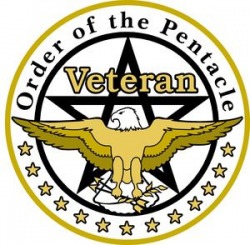 Courtesy of the Order of the Pentacle
In December of 2006, after a nine year battle with the United States Department of Veterans Affairs, and requests from various religious leaders, and Pagan Veterans went unanswered…a coalition of Heathens and Pagans called; “The Order of the Pentacle” was formed.  Some of the affiliates of this order were:  Roberta Stewart, Upper Midwest Pagan Alliance, Lodge Yggdrasill, Circle Sanctuary’s Religious Freedom Branch, Witchy Films, Responsible Informed Pagans, Harmony Tribe, Shades of Gray, Coven of the Standing Stones, Lady Liberty League, Americans United for the Separation of Church and State, along with many other individual businesses and Practitioners, came together to fight for the right for Wiccan Veterans to have the pentacle engraved  upon their government issued headstones.

On March 31st, 2007, Sergeant Patrick Dana Stewart became the first authorized United States Wiccan Veteran to have the symbol of his faith engraved on his V.A. headstone. Sergeant Stewart died on September 25th, 2005 in Afghanistan.  He was awarded the Bronze Star and the Purple Heart.  He is a Hero to us all… a patriot of his country…a confederate of his Gods…And a protector of his family.

Since then, many other families, and their loved ones have followed in Roberta and Patrick’s footsteps…Some families of veterans who served in prior wars, and conflicts have even applied to have their previous symbol changed to the Pentacle, and/or to have it added.